Stratton is the scene of Vermont’s first World Cup ski races. Birthplace of snowboarding. Renowned today for snow and grooming, fast lifts, including four six-passenger chairs and the summit gondola, and an invigorating blend of terrain for beginner to expert with 97 trails fanning from a single summit, the highest peak in southern Vermont.

Where the good times gather. Savor the flavors of Vermont fresh fare, outfit all your adventures, unwind at the Spa. Dance the night away. Share the excitement of something new – how about dogsledding? Roast marshmallows by an open fire. Or simply stargaze. They shine brighter here.

Indulge in some retail therapy with a variety of Village shops ranging from technical outdoor adventure gear to every fashionista’s dream. Outfit the whole family in the newest hike, bike, yoga and paddle products at First Run Ski Shop. Find the latest in trendy fashion and snowboard gear at the Burton store, and film your adventures with a brand new GoPro from Head Case. Pick your favorite pack at The North Face and stay up-to-date on the latest summer fashion pieces at The Dashing Bear Boutique.

Savor the flavors of Vermont fresh fare throughout the resort where this season you will enjoy tasty new options in mountain dining and après-ski created with locally sourced ingredients and crafted by Stratton’s executive chef and culinary team. We are proud to support a sustainable, local food culture that’s at the heart of every menu. 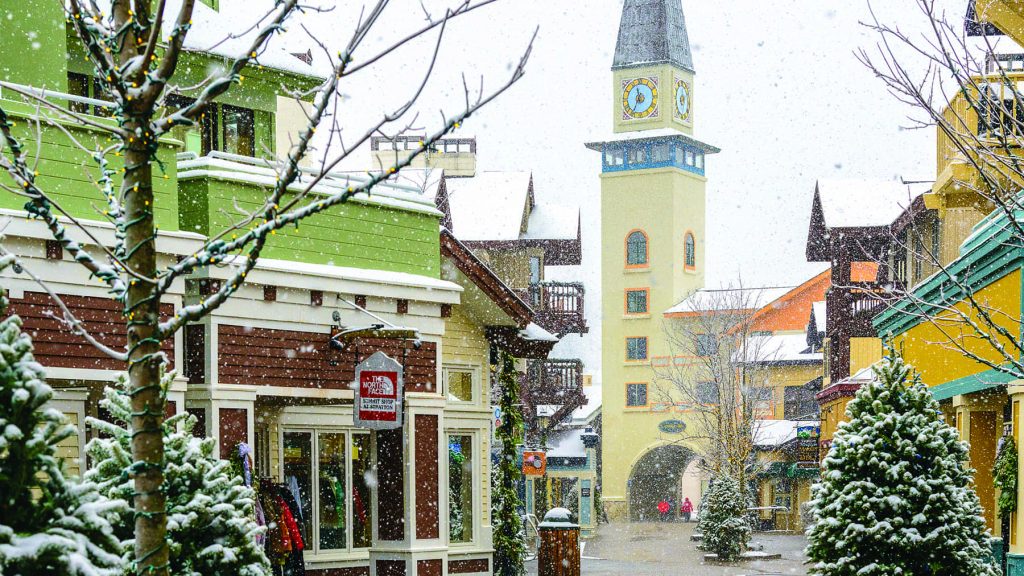 SAVE BIG WHEN YOU BUY ONLINE

Ticket prices increase as it gets closer to your desired date, so purchase today to lock in the best savings. Online lift tickets must be purchased at least 24 hours in advance. We look forward to seeing you this winter!

Stratton Mountain’s Nordic Center features 12km of trails groomed for classic and skate Cross-Country skiing, as well as snowshoeing in the Sunbowl Base Area. Beginners and experts will love the trail system. The Nordic Center is located on the left as you turn toward the Sun Bowl parking lot. Happy Trails!

CONTACT THE NORDIC CENTER:
802-297-4567 (weekends and holidays during the winter season) 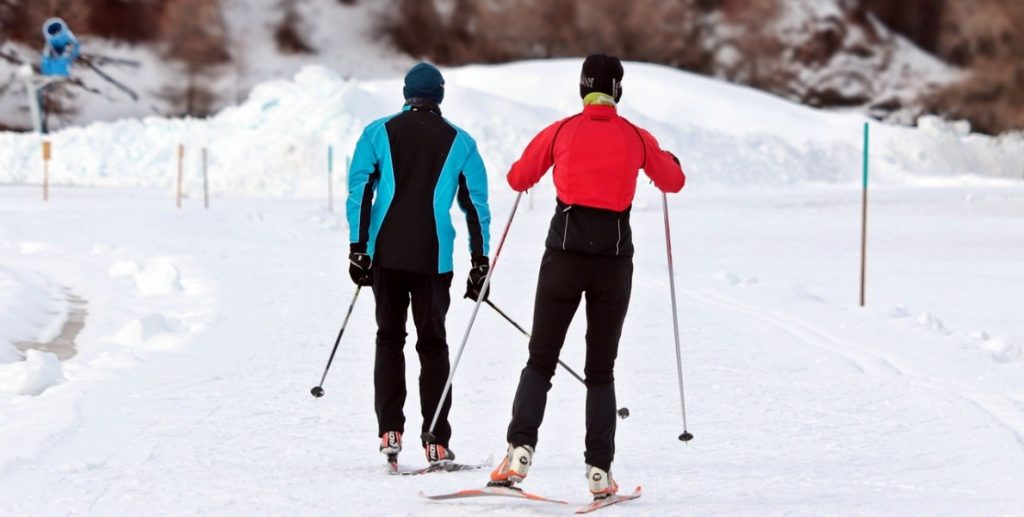 Mountain Tours for Adults & Families
Enjoy an evening of fun and adventure on our guided 1-hour Mountain Tour for adults and families. Explore the slopes of Stratton after hours with our experienced SST guides as they lead you from the Main Base to the summit. Great for beginners and experienced snowmobilers alike! With 8 departure times a night running 3 to 10 double snowmobiles at a time, our guides can adjust to your skill level. Bring the kids along as passengers and make it a family affair to remember! Adult tours meet in the West Wing of the Base Lodge.

Mini Rides & Tours for Children
Children have the opportunity to drive their own Arctic Cat 120 snowmobile.Enjoy 5-min riding on a lighted snow track before venturing onto the slopes of Stratton Mountain in follow the leader style behind a SST guide.Open to children ages 6+, max weight 100 lbs., max height 5’4”. Kids tours meet in front of the Amex lift. Individual instruction and helmets are provided.

Special Events for all ages
Snowmobiling is fun for all ages and the perfect winter adventure to make your special occasion unforgettable. Whether it’s a children’s birthday party with Mini Rides or a corporate retreat adventure, Stratton Snowmobile Tours can accommodate your needs. Ask about catering options & our fire pit!Call today to find out more about past events and how SST can make your special event a winter adventure to remember!

GUIDED SNOWSHOE TOURS
Dates: On weekends and holidays, leaving at 9:30am and 1:30pm
Price: $50 per person. $60 per person with rentals. 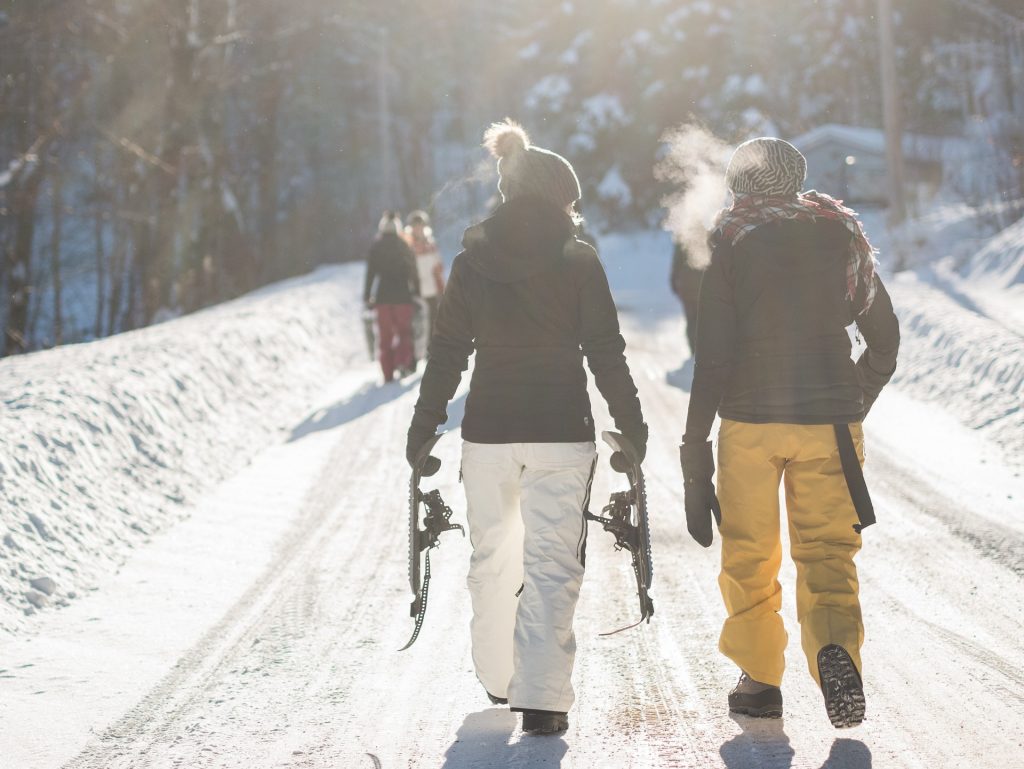 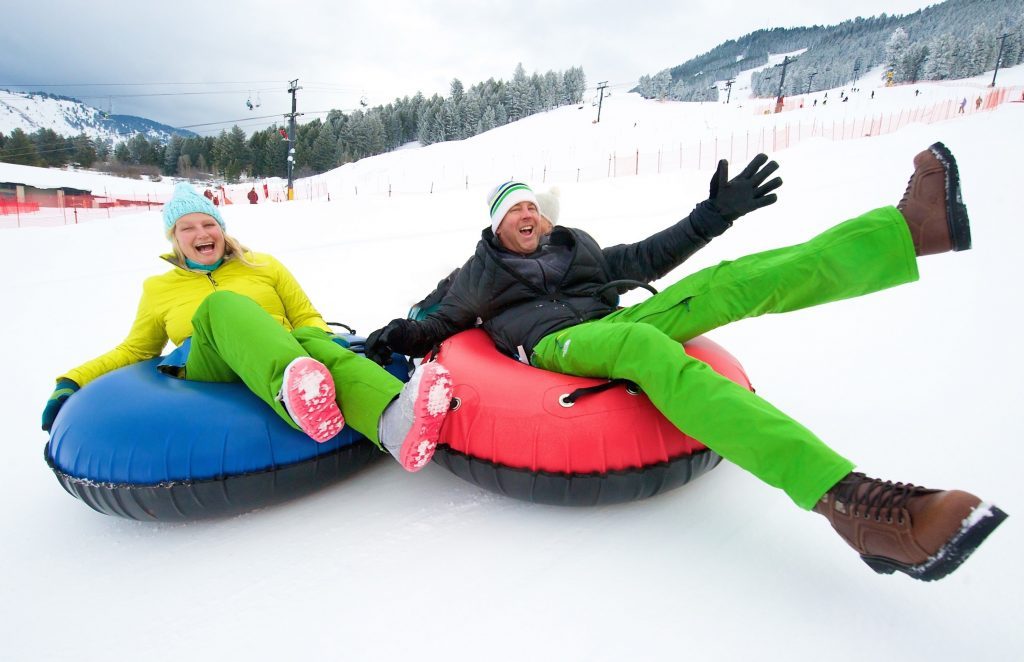 30 Minute Tour
Single Passenger: $129 – includes introduction to the dog team and loading.
Two Passengers: $80 per person based on two people per sled
Passengers should allow 45 minutes for total tour and should arrive a few minutes before the start of their tour.

90 Minute Tour
Includes introduction to team, loading, scenic views of Stratton Mountain Valley and a warm-up stop for hot cocoa, cider and light snacks by the fireplace.
A single rider will be $225.
$149 per person based on two riders per sled.

Price: $120 per person plus tax and gratuities
Includes: Snowcat Ride to and from the Mid Mountain Lodge, seasonal beverage and snacks upon arrival, and a three course meal.

Enjoy one of our signature package or customize a relaxing day just for yourself with a massage or other service. Turn over a new leaf with Naturopathica 100% skin-loving products and treatments. Our talented staff will help you unwind and make your day at Stratton the perfect get-away. Walk-in’s welcome, appointments recommended. Follow us on Facebook.

The Spa is located at the end of the Stratton Village, near the Welcome Center.

*Available for private parties of 4 or more 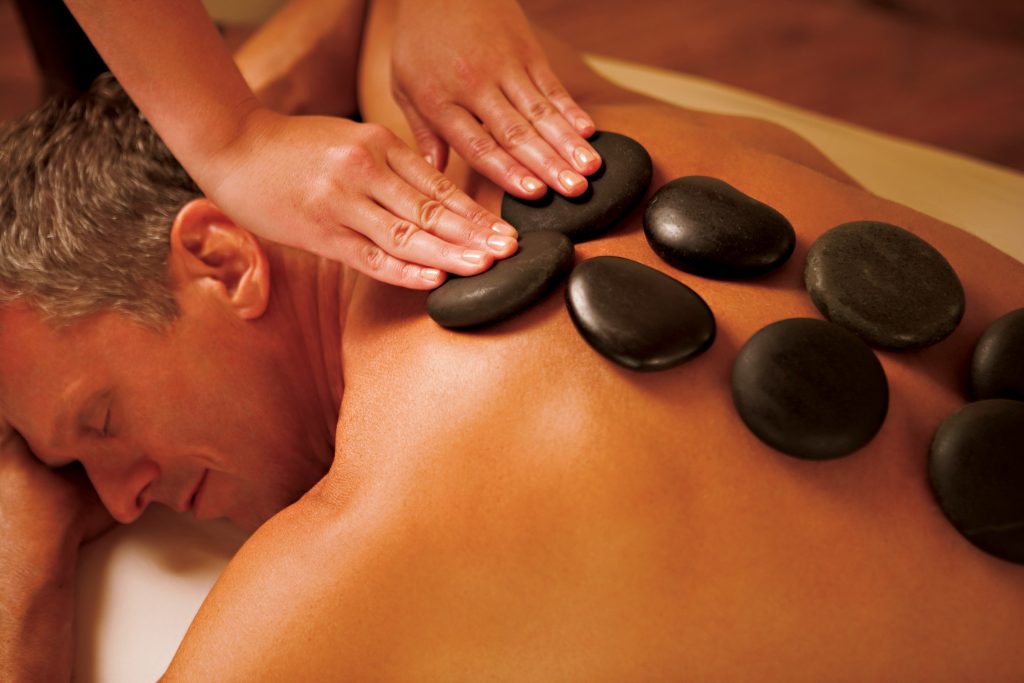 Located just beyond Stratton on the way to Manchester. They have 47 trails and ten lifts. In Ski Magazine’s October 2014 issue, Bromley was ranked within the top three “kid friendly” mountains in the East on their list of Top-Ranked Eastern Ski Resorts. It is one of the few south facing ski resorts so you get a little more sun during your runs down the mountain. It is also a little less expensive than the other resorts in the area.

Bromley isn’t just for winter!  Looking for a great family summer adventure? Bromley is your family-friendly summer resort! With 23 rides and attractions, we’ve got loads of summer activities for everyone. At a full 2/3 of a mile long; thrills await kids and adults alike on our classic triple track Alpine Slide. The Sun Mountain Flyer, a ZipRider®, zooms at speeds up to 50mph over half a mile with a 700 foot vertical drop! Rated Best Treetop Play in New England by the Boston Globe, our Aerial Adventure Park boasts 65 elements over 5 courses for the ulitimate summer family fun. And there’s so much more: mini golf, bungee trampolines, and the Giant Swing, just to name a few. With free family entertainment most weekends and yummy Sun Deck eats from burgers to salmon BLTs, Bromley is Southern Vermont’s complete family fun zone! 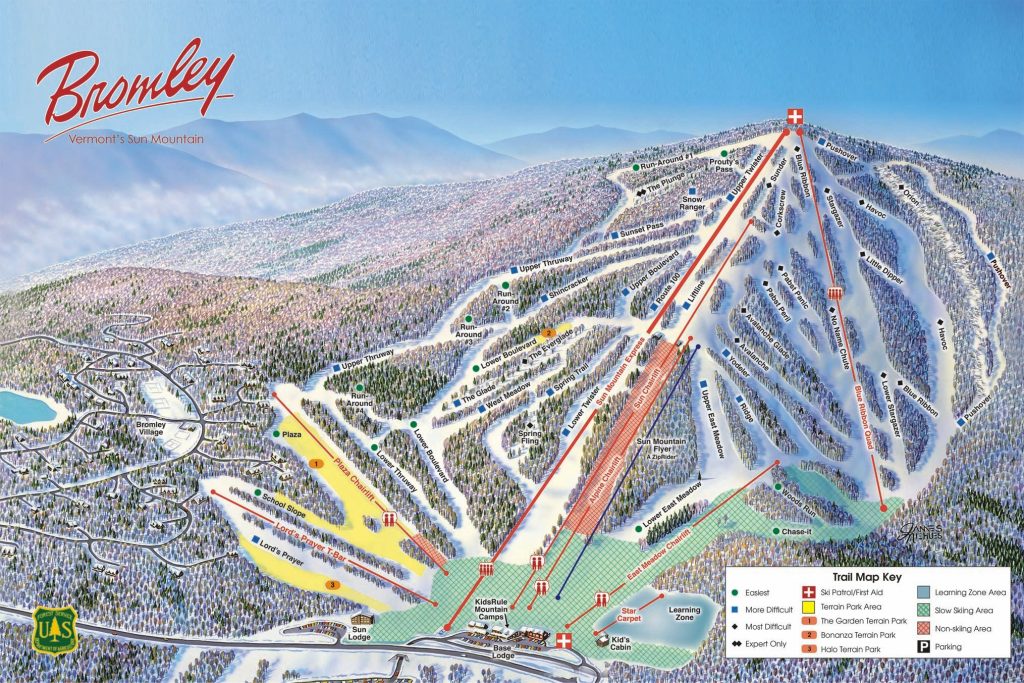 Mount Snow is Vermont’s closest major resort to people living in and around most of the Northeast’s bustling metro areas making for a short drive to real, big mountain skiing.

Founded in 1954 by National Ski & Snowboard Hall of Fame member, Walter Schoenknecht, Mount Snow quickly became one of the most recognizable ski resorts in the world. Today, Mount Snow is owned by Peak Resorts which has invested more than $25 million in capital enhancements since the spring of 2007. The marquee elements of those enhancements are the installation of more than 250 high output fan guns, the most of any resort in North America, and the addition of 645 new low-energy snow guns in 2014 giving Mount Snow one of the most efficient snowmaking systems in the industry. Mount Snow is also home to the Bluebird Express – the first six passenger bubble lift in the East.

Mount Snow is Vermont’s southernmost ski resort, making it the closest skiing and riding to the Northeast’s major metropolitan areas. With 85 trails across four mountain faces and 589 skiable acres, Mount Snow has something for everyone: from families to intermediates to park riders.

Cross country skiing is a great way to get outside, stay fit, and enjoy the Green Mountains. Find peace or seek adventure on a trail system that winds through the woods and offers beautiful views of the Mount Snow valley. The trails at the Timber Creek Cross Country Ski Center offer various routes and range from Easier to Most Difficult. In addition to trail access, Timber Creek offers equipment rentals, instruction, packages, and season passes. 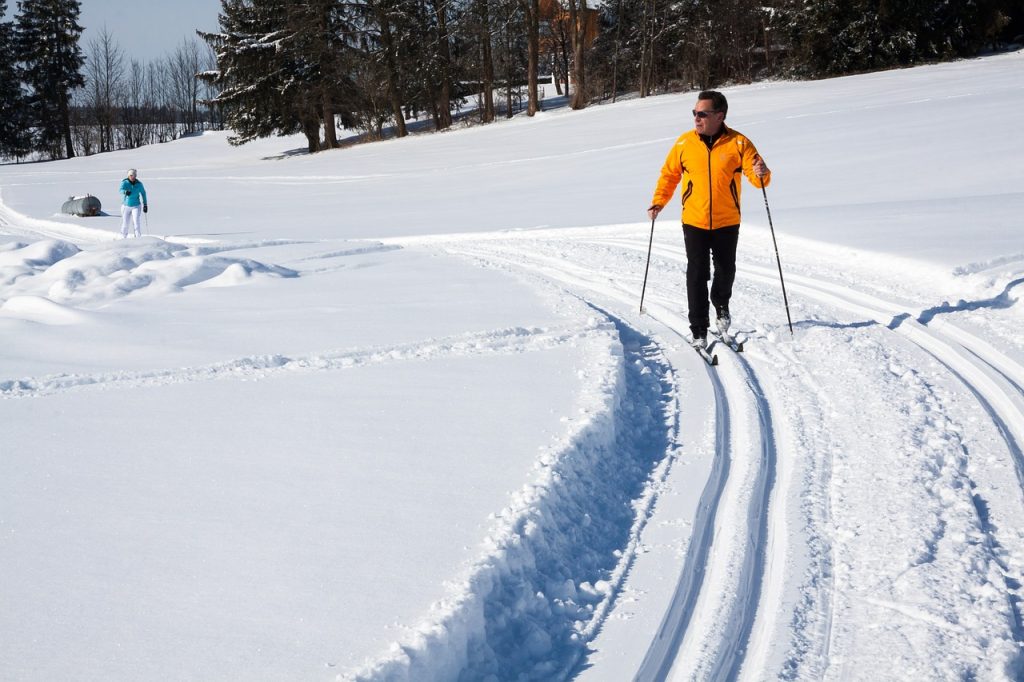 Experience winter as never before. Be pulled by a team of Siberian huskies on an exhilarating 2-hour sled ride through Vermont’s scenic winter landscape.